In Which I Love Sex & Violence

Awww, how awesome did my post title turn out? So tantalizing!

Because really, today, I'm talking about the book Sex & Violence, by the awesome Carrie Mesrobian! 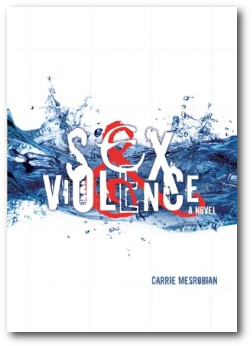 I was lucky enough to win a copy of the book through a Tumblr contest (extra lucky because it's signed, and because it doesn't come out until October. But if you like gritty, realistic YA, then I suggest you consider pre-ordering)

The MC, Evan, is just one of those kids you kind of want to just hug. Yes, he does dickish things, but rarely did I think he was a bad person. And the things he does are nothing compared to the things that are done to him. He more than pays his dues. And on top of that, he thinks what happened to him (an extreme, almost fatal act of violence and the violation of a friend) is deserved because he spent a lot of his life being said dick.

Evan spends so much time disliking himself that all you want to do is to hug him and tell him that, yes, maybe he's a little broken, but he's not beyond repair.

Also, because I'm from Minnesota and the majority of the book is set in Minnesota, I like it extra hard.  MINNESOTA REPRESENT! Woot!

I don't like to tell people to buy books, because I don't know your tastes, but like I said above, if you like gritty realistic YA novels, with teens that swear and drink and have sex but learn hard lessons, whether it's deserved or not, I think you'd really like Sex & Violence. I read it in almost one sitting True Story.

(also, it's a very pretty book. There are almost hidden embossments on some of the pages, referencing some of the reoccurring images in the book. It's like an extra little surprise!)


Here's the back copy of the book:

AT FIRST YOU DON'T SEE THE CONNECTION.

Sex has always come without consequences for seventeen-year-old Evan Carter. He has a strategy--knows the profile of The Girl Who Would Say Yes. In each new town, each new school, he can count on plenty of action before he and his father move again. Getting down is never a problem. Until he hooks up with the wrong girl and finds himself in the wrong place at very much the wrong time.

AND THEN YOU CAN'T SEE ANYTHING ELSE.

After an assault that leaves Evan bleeding and broken, his father takes him to the family cabin in rural Pearl Lake, Minnesota, so Evan's body can heal. But what about his mind?

HOW DO YOU GO ON, WHEN YOU CAN'T THINK OF ONE WITHOUT THE OTHER?

Nothing seems natural to Evan anymore. Nothing seems safe. The fear--and the guilt--are inescapable. He can't sort out how he feels about anyone, least of all himself. Evan's really never known another person well, and Pearl Lake is the kind of place where people know everything about each other--where there might be other reasons to talk to a girl. It's annoying as hell. It might also be Evan's best shot to untangle sex and violence.
Posted by Sarah Ahiers at 7:00 AM

Oh wow. I hadn't noticed that about the physical copy. I read the e-galley, and I have the hardcover, but haven't actually re-read it. Sounds awesome!

Sounds like a 'hit you in the gut' type of book. October, huh?

Sadly I bet he's like so many kids out there today.

I can't wait to read this book. I have it pre-ordered. Two more months....

I remember hearing about this book a while back and thinking I'd like it. I believe I may have to order it through my local bookstore. Thanks for reminding me!