In Which I Recommend A Book

For the books I don't love, I can usually articulate why. But this isn't a book blog, and I'm not a reviewer, so I don't feel it's my place to post why I don't like a book. I'm certainly willing to talk to you about it if you ask, I'm just not going to post it on my blog, or write a review on amazon or Goodreads. It's just not my thing, yeah?

And for the books I love, I often times have a hard time expressing what it is about the book that makes me love it so much. Sometimes I can speak to a certain character or scene, but sometimes I can't. Which is why when I do occasionally talk about books I love on my blog, usually it's just a sentence that says something like "I've read this book tons. I love it. You will too" and that's it.

But even with that, sometimes I feel the need to give it a shot.

I have a local NaNoWriMo pal. His name is David John Wellman. We've never actually met, due totally to my own fault at really not making much of an effort to hit up many NaNo write ins over the years. Also he lives in the southern half of the cities and us northerners disdain the south. It's just not as cool and this is a fact.

ANYWAY. He self-pubbed his 2005 NaNo novel back in December and I told him when I got a kindle I would buy it. And I did and it was the first book I bought after the lovely Anne Gallagher's Lady's Fate.

And here I am now, to tell you all about it. Not just because he's a pal, but because I really enjoyed his book and I think you might too.

Awakened (Blue Night #1) is awesome. Straight up. I knew next to nothing about it (because I was lazy and didn't bother reading the Goodreads info) but I couldn't put it down. 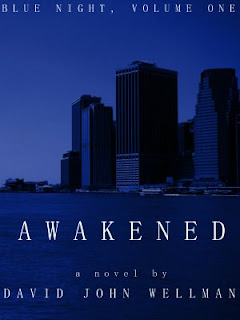 Here's the Goodread info for you, in case you're as lazy as me:

Not long from now, a meteor the size of Lower Manhattan slams into the Atlantic Ocean. Tsunamis spread across the globe, killing tens of millions and crushing great cities into rubble. Rain falls everywhere for weeks. Crops fail. Governments topple. Society hangs by a thread.

Scientists had predicted it would happen someday, but they could not have predicted what happened next. For the meteor brought something with it, something neither science nor religion could possibly explain. Something that awakened a part of the human race that had lain dormant for millions of years. Some call it witchcraft. Others call it divine power. Most do not believe, until it happens to them.

Now an unlikely band of heroes must struggle, not only to survive, but to understand what they have become. Only then can they survive the day when all of humanity will become Awakened

1. Multiple character POVs. Think Stephen King. This is a style that's kind of gone out of vogue. Mostly just because the types of books that shine with this style are not as popular anymore (Horror ala Koontz, Crichton (RIP) etc)

2. Apocalypse. A meteor impact apocalypse. I mean, if you don't know that I love pocys, then you don't really know me at all.

3. Likable characters. There's not a single character I don't like in the novel. Even the ones who do terrible things to main characters only earned my sympathy.

4. Set in MN. I know I've written in the past about how this sometimes freaks me out, but in this case it didn't.

5. An immediate desire to read the sequel (which is not yet published BOO-URNS)

So. If this sounds up your alley, I would highly recommend getting your copy asap!

Wow, I really did like the blurp from Goodreads! And eventhough this isn't in my normal genre-reading, it's something I would take a risk on.

Thanks for sharing, Sarah!

I'll have to look for it. And Anne's book is really good as well.

Wow, thanks for the recommendation! I'll have to check it out.

You have a new banner?

That's a hell of a rec. Thanks. All of my manuscripts nearing completion are post-apocalyptic. So you know I love it.

The books I really love, I'm usually timid to share with others. The reasons I fall in love with something aren't always universal across readers.

So even though there are several amazing books out there that I'd love to share, when I do highlight one, I try to make sure I think it will have mass appeal.

Then there are those special books I will go out and buy for a friend I'm so desperate to have them read it and love it too.

I think I saw a review of this in the Strib (or somewhere) not too long ago, and jotted it down. I'll have to make a point to get it sooner.

Also he lives in the southern half of the cities and us northerners disdain the south.

The feeling is mutual, Northerner...

It's just not as cool and this is a fact.

We have the zoo. And Valley Fair. And Ren Fest. Bam! Contest over.

I will have to check out this story. It has apocalyptic flavor to it and a hint of paranormal. I think I'll enjoy it. Oooh and your doggie is so cute!

This does sound like something I would read. And if it gets a thumbs up from you, I know I can trust the source.

Oh, this sounds wonderful! I will have to watch for it--self-published? I wish I had more reading time!

Love your new banner! We'll have to chat this weekend about how you did it. :)

Ditto on the North vs South debate. Unfortunately, my vote isn't usually counted since I'm an Anoka County girl and people think we're all farmers. (NOT TRUE!)

And I need to check out this book. I'm a HUGE fan of apocalypse books that strike me as "possible", ie: meteors or other natural disasters. (Plagues and overbearing governments aren't doing it for me anymore.) Plus set in Minn AND a NaNoer? Must check it out. Thanks!