In Which We Hit The MOA

And by hit I of course mean visit. 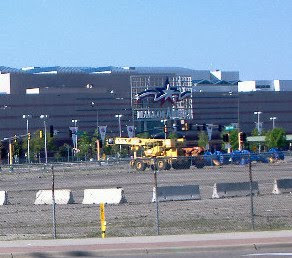 MOA = Mall of America and we travelled there to see a free advanced screening of Shrek Forever After. 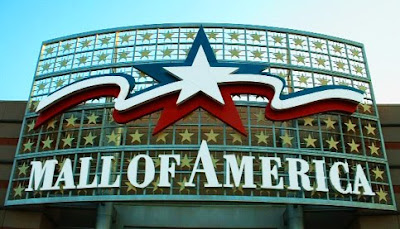 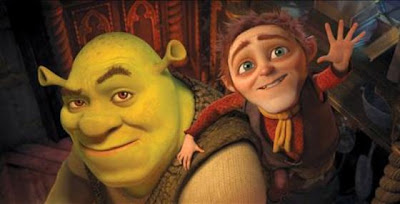 The movie was OK. I would put it on par with the 3rd Shrek movie. The biggest flaw in the third one, to me, was that they tried too hard to make it funny, so then it just sort of fell flat.

In this one, there wasn't really any "trying too hard" humor, but in general it wasn't as funny as 1 or 2 (though there were definitely a few hilarious moments). Many of the scenes that could have been comical (fat Puss, etc) had already been spoiled in the previews. It also wasn't as action packed as 2 so we're left with a movie that was just OK.

Though it seemed like the kids in the theater really loved it, so feel free to bring the kiddies.

But for free? it was awesome.
Also we were forced to watch it in 3D (the MOA theater 3D glasses are terrible, btw. I felt like Harry Potter and the lenses had streaks on them), but it turns out the 3D was mostly just used to add depth.


Once done with the movie we went to eat some lunch. Normally when at the MOA we hit a whole bunch of little food stands or browse the food courts (of which there are two) but we decided to eat at Bubba Gump shrimp instead since Twin and I had only eaten there once before. 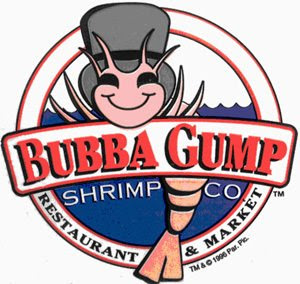 It was OK. The shrimp was good, but for most of us we could name another restaurant that had better food.

In honor of Forest Gump, here are the types of shrimp we ate:


Then we putzed around a bit and hit a few shops we wanted to check out.

Here's some examples of the weird things you can find at the MOA: 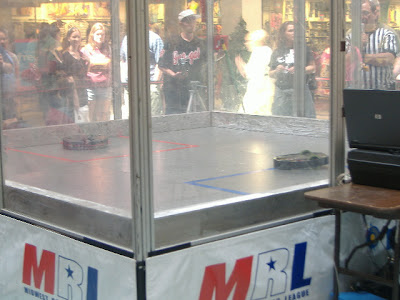 We were so excited to watch this match, but the one bots crapped out so the other bot won by default. BORING. I wanted to see the winner bot shred the other one with its red spinning blade of death.
Real battle bots I guess is much more slow and prone to technical errors. 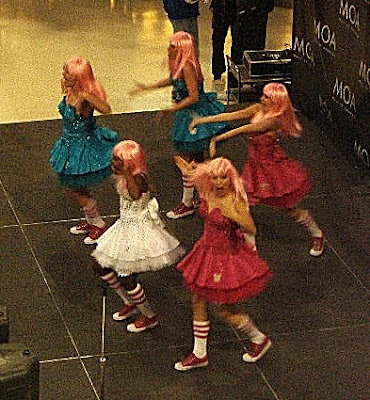 I don't know what the heck this is. They were advertising these chicks on all the video kiosks so once one o'clock came around we made sure we were above the rotunda to see what the heck the deal was.
Turns out it was pretty much what the advertisements said, chicks in wigs, singing and dancing. And by singing, I mean lip syncing. Poorly.

Also the MOA has a Legoland, which is pretty cool as a kid, but would be much cooler if you could afford to buy the expensive Legos... 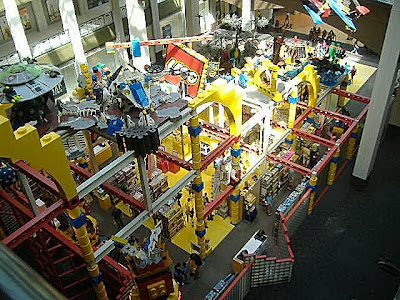 Then Twin and I got a Godiva chocolate drink. 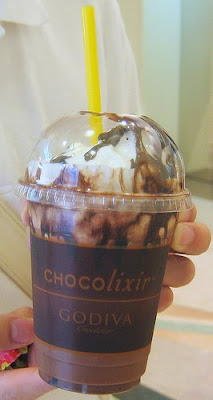 We took some pics of what used to be Camp Snoopy and is now Nickelodeon Universe so you can see the awesomeness that is at the center of the MOA. And then we decided to head home. We spent the evening playing Halo. All in all, a pretty awesome Saturday 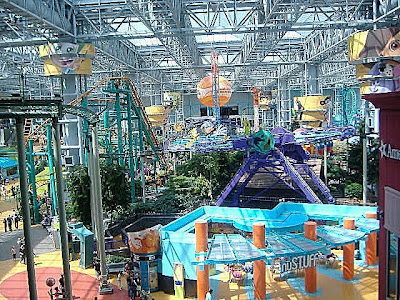 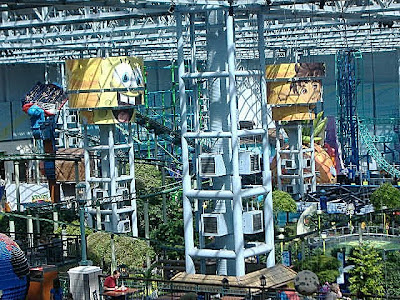 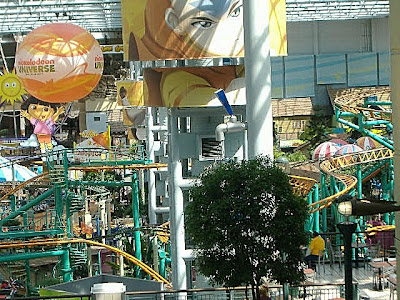 My friend's from Minnesota and loves the MOA so have heard fun stories. But your pics are the first I've seen. Thanks for sharing. What an amazing place. Happy you had a fun trip!

Sadly, we were not there the same day. Then I could've yelled, WAZZZZZUUUUUUHHHH! And you woulda been, why is that crazy old lady over there yelling at me? And then I would've done an Irish jig and the you woulda said, OH! It's just crazy old Hannah!

Sam and I walked through Camp Snoopy and my ovaries shriveled like raisins.

Loved the pics - the mall looks fun. I'm not a big shopper but I love walking through the West Edmonton mall for the entertainment value. Next time I'm down that way, I'll have to see the MOA.

That's one crazy-ass mall! It's like it's on steroids or something. The Godiva drink... yum.

We were there over Easter. Love, love, love that mall.

Great pics. I have one scene in my wip in which the characters end up in that mall. But they only go to the bookstore and food court. They were in Minneapolis for other reasons. :)

I hate when previews spoil a movie! Sometimes I wonder what the heck movie trailer makers are thinking.

I echo Angie above: I'm coveting that Godiva chocolate drink!

OH, you're making me nostalgic. Many thousands of dollars spent there at the MOA in after-work drown my sorrow shopping sprees. I used to work right there in that big ugly copper tower. The Steve Maddon shoe store knew me by name... as did the shoe department at Nordstrom. :)

Thanks for the glimpse of MOA. I will most likely be stopping there, with a 9 & 10-year-old in tow, on vacation in a few weeks. The Battlebots (if they work) and Lego Land look fun. The Wiggies - just weird.

Did you ride the Avatar ride?

It's been ages since I rode anything there.

Hot damn, Palindrome, you're on fire!

I'm feeling you on the gratuitous 3D in movies these days. Avatar was cool in IMAX 3D and everything... but seriously, every movie is not made better (instead of just more annoying) with the addition of 3D glasses.

At least the trip was an adventure.
I'm still debating on the new Shrek. Lackluster reviews made me decide to skip Robin Hood. Might have to skip this one as well.

@Palindrome: I found your comments to this post to be particularly hilarious.

@Teebore- OH!! LOL! It's the truth. I occasionally jig and kids shrink my ovaries. :) And I'm so tired I'm loop-dee-loo!!

Remember that song? it was obnoxious.

I don't think it's LAA because that doesn't rhyme with NIGHT but who am I to judge?

I have never been to MOA. I must admit, it looks a little...scary!

I've heard of the MOA before, but I've never seen photos. Looks like a fascinating place. Legoland would have been such a hit with my kids when they were little!

You know, I'm starting to get sick of the 3D thing. It's like now EVERYTHING has to be 3D - it's overload! I don't think those 3D televisions are gonna fly, people are going to get sick of wearing a pair of glasses to watch tv. But that chocolixir godiva drink? SO made of win. I must figure out a way to replicate it for personal enjoyment (ok that sounded weird)!

Mmmm... chocolate drink. Can you send me one please? kthxbai

When my son Mike was four (he's 20, now) I found the book "Shrek" and loved it. I read it to him dozens of times and it was both of our favorite book. I wouldn't read any other kids' books to him because they were all syrupy-sweet, but I loved Shrek. And then... the movie came out. I hated it. They "Hollywoodized" it. Made a happy-sappy ending. In the book, Shrek still is ugly and so is his wife and wherever they walk and breathe foliage dies. It was the most intelligent kids' book I ever read. The movie? They couldn't even make Shrek look ugly, but just "ugly-lovable." Yuch! I just wish they'd make a movie that was true to the book. But then, I prefer the original Cinderella story where the stepsisters cut off their toes to fit into the slipper. Disney messed that one up, too...

Les - i too enjoy the original cinderella. There's nothing wrong with a little maiming.

I wish i could send godiva drinks to everyone! They are so delicious

Hot damn! Lola wants a MOA near her! Well, I guess I there can only be one. But wait, can I have a Mall of the World/Earth....UNIVERSE?! Please!

Anywhoziwazzit, I love the photos. Thanks for taking them and sharing them with us. :)

It's like it's on steroids or something.
Adsense Alternative