Sorry about not having a post on Monday. I was so busy this weekend with house repairs and my cooking club, and then Twin and I watched a movie (Big Year) that I just completely forgot to write one.

But I'm back now, with my usual serving on Wednesday Weird to offer up.

Today we're going back to cryptids. The week is another one of my favorites: the Thunderbird.

Thunderbirds, besides being a Native American legend (which may be connected, natch) is the name given to a large, condor-like bird reported throughout North America since we started keeping records.

They're typically described as large, dark colored birds with wingspans over fifteen feet long. As a reference, the current living bird with the largest (known) wingspan is the Marbou stork with a span of 13 feet (the albatross is close second, with a wing span of 12 feet).

The most famous sighting of a thunderbird is the Lawndale Incident, occurring in 1977 with multiple eye witnesses.

On July 25th 1977, 10 year old Marlon Lowe was playing in a field by his house with two friends. Two giant birds flew overhead and one swooped down and snatched the boy, carrying him several feet before dropping him, possibly due to his mother's screams. There were 7 witnesses to this event, all of whom described the same thing: two black birds with long curled beaks, white rings around their necks and wingspans of over 10 feet. Marlon's mother compared the size of the bird to an ostrich, though she said it looked more like a condor.

There were several more sightings of the birds in the area before the sightings ceased.

There really aren't any living birds large enough to carry a human child that large, at 10 years old (though there are plenty of eagles that have killed smaller children, as human infant skulls have been found in eagle nests. The African Crowned Eagle is one (and there is record of one trying to carry off a 7 year old), but so possibly are the Harpy Eagle and the Goden Eagle (which is a North American bird, btw) Here's an awesome article on living badass birds of prey, if you're interested ).

One of the likely contenders for the identity of the Thunderbird is the recently extinct Teratorns.  Alive during the ice age, their remains are almost always found with human habitations, which suggests they had plenty of interaction with Native Americans of the time. Their bones have been found from California to Florida and are numerous at the La Brea tar pits. 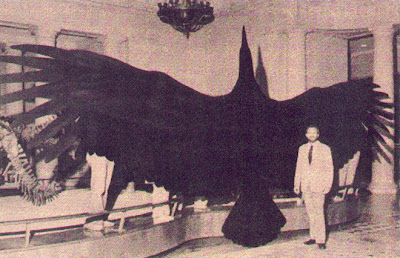 Besides the Lawson Incident, there are frequent, and numerous sightings still to this day, across the US.

So what do you think? Are there unidentified giant birds living in North America?
Posted by Sarah Ahiers at 7:00 AM

W.H.O.A. I would absolutely freak if I saw a bird with a 13-ft wingspan! That photo of the Ice Age bird is cah-razy. If birds of that size are still in the U.S., it seems like we'd have noticed them more...Then again, there are so many wooded, hardly-inhabited stretches of land in our country. Who knows?

Uh, now I'm afraid to go outside. If I saw a bird like that, anywhere, I would pee my pants and scream like a little girls. Gives a whole new meaning to "Attack of the Birds". *shudder*

I had a hawk pick up a 10 lb rhea chick once. Fortunately, the chick struggled so much the hawk dropped him.

He had severe scalp lacerations, but I nursed him back to health. We called him Scalp from thereafter. :o)

I'm fascinated by birds of prey.

If so, we're going to need a really big cat!

Don't worry Alex. They are gone now 'cause the dire wolves and sabertooths ate them. What happen to the those two is a mystery...;)

Neil Gaiman has them in American Gods. That's one huge bird...kinda scary. Did you change the banner up top? I love it.

There's a big ass hawk that shows up in my backyard every so often. Not "thunderbird" big but big enough to scare away all my little birds. I don't want anything bigger to show up.

That's one hell of a bird. I've immediately got the image of Native Americans using them as steeds :)

Thunderbirds, besides being a Native American legend

Dude, we get HUGE hawks, eagles and vultures here. They try to swoop down on my dogs, but the westie loses his shizz on them and scares them off.

Crap! Can you imagine getting doused with droppings from that bird? :)

Wow. That's a bit scary. But hey, why not? It's kinda cool to think they're out there.

Awesome. Now, what about ThunderCATS?

I love the idea... When my kids were little we lived in Portland and the zoo there has an AWESOME Birds of Prey show, but they were adamant about keeping children seated when the birds were flying. My only hesitation really (because I like to believe) is why would there be an absence of new dead ones. i can see them living sort of ellusively, but wouldn't people manage to find dead ones at least now and then?