And how apropos that Halloween is on a Wednesday this year, for a Wednesday weird? And since it's Halloween, it seems fitting to focus on a halloweeny weird: werewolves.

I've actually read quite a few first hand accounts of "werewolf" sighting, (they're actually kind of common up here in MN, WI and MI) and though many can surely be chalked up to a bear with mange (see below for a photo) (OT: That's the name of my Rockband band: Mange Bear, purely because they get mistaken for sasquatch and other cryptids. True Story) there are some that can't be explained away so easily. One of the most famous series of encounters is the Beast of Bray Road.

On October 31st, 1989 (Yay! 13 years ago TODAY! (Halloween of all days)) Doristine Gipson, from Elkhorn, WI was driving along Bray Road. As she neared an intersection she leaned over to change the station on her radio when she felt her right front tire jump off the ground as if she had hit something. Concerned, she stopped the car and got out to see what it was. Finding nothing on the roadway behind her car, she began to look around.

As she peered into the darkness, she suddenly saw a dark, hairy form racing toward her. She did not see what the figure looked like, but she did see it was quite bulky and she would later compare the form to someone who works out continually with weights.

Startled by the oncoming form, and by the sounds of its “heavy feet”, she got back in her car. She was attempting to drive away when the beast jumped onto her trunk. Luckily, it was too wet for the creature to hang on and it fell off onto the pavement. Doristine returned to the site later on that evening with a young girl that she was taking out trick-or-treating and saw a large form on the side of the road. When she saw the creature moving, she ordered the child to lock her door and drove quickly away from the scene.

A few days later, 24 year old  Lorianne Endrizzi was rounding a curve on Bray Road and saw what she thought was a person kneeling and hunched over on the side of the road. She slowed down and was no more than six feet away from it. The sighting lasted for about 45 seconds and she clearly saw a beast with grayish, brown hair, fangs and pointed ears. "His face was … long and snouty, like a wolf". Endrizzi was completely unnerved by the sighting. She later stated in an interview that the creature “appeared to be so human-like that it was scary.”

The media picked up these stories and more eyewitnesses came forward, as well as people who had seen the creature in years past. Other details about the sightings include:

The animal walking on two feet
The animal kneeling like a person
Human-like hands with claws at the end
The animal carrying and eating food held on the palm of it's hands
When on all fours, a sloped back and collected hind legs and a stronger front end
More than one encounter where it chased people or children

The sightings would continue for a few years before finally drying up.

So what do we think the animal could have been? Some people want to say a wolf, or wolf-dog or coy-dog. Some prefer the idea of a shunka warak'in which is a wolf-like cryptid that resembles a hyena.


And still, a mange bear may be the best culprit. But even bears don't eat their food in the palms of their hands. 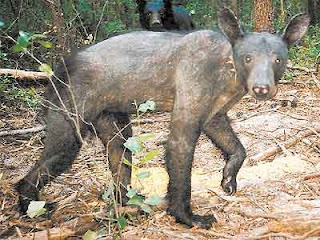 What are your thoughts? And do you have any exciting plans for Halloween?

Who knows. But seeing how it was on Halloween and right after it, it makes me wonder if someone didn't go through some elaborate makeup to be a werewolf.

Or maybe the werewolf thought it'd be safe to be seen.

--I didn't know about your rock band. Do you still play gigs?

Looking at that mange bear photo, seems like the likely suspect. Does almost possess human qualities.

Did you see the report of that guy who dressed up as sasquatch to pull a prank and got shot? This totally reminded me of that.

I'd have to vote for the mangy bear before someone in costume.

But even bears don't eat their food in the palms of their hands.

But they could, right? Maybe it was just a really smart Mange Bear.

how come i haven't heard of shunka warak'in?

Interesting. Maybe a rabid werewolf! Have a happy Halloween! I'll be taking my son and his friend out trick-or-treating.

Maybe people are more apt to think they see the supernatural around Halloween.

Wow; mange bears are weird! I wonder it all the sightings were on the same stretch of road? It does seem a tad odd ...

'Twas surely a man in an elaborate costume who got amnesia after being hit by Doristine's car and thought from then on he was some sort of mangy wolf-bear. (As for the earlier "eyewitnesses." they were just attention-seekers with made up stories.)

Was someone drinking heavily? :)

There have been several 'beasts' spotted in London. One turned out to be an obese cat.