Time to talk about some more Out Of Place Objects

In 2002, in an area of Qinghai Province, China not known to ever contain people, let alone industry,  three mysterious triangular openings were discovered on the top of a Mount Baigong. They were discovered by U.S. scientists on a trek looking for dinosaur fossils. 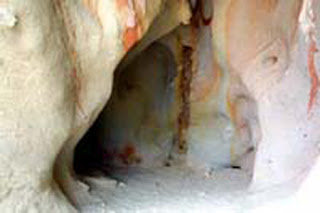 Inside the openings are hundreds of ancient rusty iron pipes of unknown origin. Some of the pipes go deep into the mountain. Some of them go into a nearby salt water lake. There are more pipes in the lake, some protruding above the surface, others buried in the lake bed, and more still running east-west along the lake shore. Some of the larger pipes are 16 inches in diameter, are of uniform size and are placed in what seems like purposeful patterns. The smallest in size are no bigger than toothpicks.

So that alone, is pretty weird. But what makes it even weirder is that archaeologists have dated the pipes to around the time when humans were still learning how to cook food in fire, let alone casting metal.

The pipes are made mostly of iron, but are also about 30% silicon dioxide.

Another weird point: the pipes are clear of debris, even though they're craptacularly old, which suggests they were actually used for something. Oh, also, the mountain? Pretty much completely inhospitable to human life.

Locals living in the southeast area of the province have known about the pipes for centuries and credit them to extraterrestials and have stories of alien visitors.
AND not to mention, there's a 200 foot pyramid near the mountain's summit.

There are, of course, records and other discoveries similar to the Baigong pipes around the world, but those, of course, are for another post.

Thoughts? Theories? Let's hear them in the comments!
Posted by Sarah Ahiers at 7:00 AM

Heh...this reminds me of an old SF short story I wrote.

I'd be interested to know how old those pipes are. The landscape could've been very different then.

I think the most fascinating thing about this post is your use of the word "craptacularly". One of the best wordsI've heard in a long time.

Of course extra terrestrials put those pipes there. Who else could it be? I'm sure they needed the water for something.

I agree with Anne. Best word ever.

As to the pipes, clearly it's an advanced and complex system of hookah pipes for the Great Race of Yith.

Yes, it's like the SyFy craptastic movie!
That is really odd. Maybe some people were more advanced than we thought.

I'm with Anne! Love that word.

It's pretty cool. I love that the locals just took it as aliens did it.

I love the weirdness. Reminds me of a movie I've seen...can I remember said movie, of course not! That's crazy talk!

Pipes were made by humans not extra-terrestrials. They'll just have to figure out what they were used for and probably rethink early civilization in that area.

Sarah, where do you get these? Seriously? I'm addicted to your Wednesday posts. You rock!

Flabbergasted! Sweet mother of Science, there has to be something to explain that. Right?

*Sigh* So nice to be able to read the Wednesday Weird again! :)

Hmmm so it's possible the tests used aren't as accurate as they thought.Or possible early civilizations were smarter than they thought. I mean if you think about it, the use of pipes is not all that genius. It's the materials used to make them that's so odd. Very interesting!

BTW thanks for stopping by my blog with warm wishes. :)