In the world of archeology, finding a mummy is the shit. I mean, they give you a medal and junk. Well, not really, as far as I know, but you get what I'm saying. You get some mad props if you're an archaeologist and find a mummy.

In 2000, someone tipped off Pakistani police that there was a mummy in a house that the owners were planning to sell on the black market for $20 million dollars and have smuggled out of Pakistan. When they raided the house, it turned out the tip off was right, there was indeed a mummy.

The mummy was 2,600 years old, encased in a carved stone coffin inside a wooden sarcophagus and was wearing a gold crown and mask. An inscription on her breastplate read: I am the daughter of the great king Xerxes. I am Rhodugune. 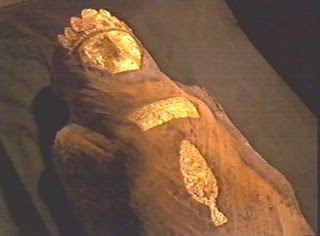 This was a huge archaeological discovery. No Persian mummy had been found before, especially royalty. And actually mummification had always been thought to be a strictly Egyptian practice.

An incident broke out about who would get to keep the mummy, Iran or Pakistan. So while that was going on, scientists got down to sciencing and closely examined the mummy.

That's when things got weird.

The first thing they noticed was that the grammar on the inscription was terrible. Like maybe the inscriber didn't actually speak ancient Persian very well.

Then they noticed that the coffin itself wasn't ancient. It was actually only about 250 years old.

Like the grammar, the mummification process was a crap job as well. Some of the steps of the process had been completely skipped.

So, at this point, with the hack work, they started to think that maybe the mummy wasn't a princess at all. Maybe someone had dressed up a common mummy as a princess to hopefully garner more bucks on the black market.

BUT! And this is a big but. (heh. Big butts). It turns out the mummy herself wasn't ancient at all. She'd only been dead 2 years.

And she'd been murdered.

It seemed someone had actually murdered a person to make a fake mummy purely to try and sell it on the black market for a crap ton of cash. And there is evidence to show that this wasn't the first time they had done this. They had actually done this three other times as well.

So, not only do you have to worry about being murdered by a stranger, now we have to worry that said stranger will mummify us (crapily) all to make some money.
Posted by Sarah Ahiers at 7:00 AM

What a way to go! I wonder how many times people have done this over the years?

The moment you said the inscription used bad grammar I knew it was murder (of the grammar and the poor victim).

And now that it's no longer valuable I'll bet both Iran and Pakistan are saying, No, dude, you take it.

Oh man, they must have been watching that episode of Castle.

Only thing that would have made this crazier would be if they'd gotten the money!

remind me to always travel with a very loyal bodyguard!

And to do a good job with the grammar of languages I'm screwing with.

Not to mention, why would a persian princess have her name like that? Wouldn't it be more like "I am the daughter of Kings, the Leader of peoples, and the gods shall know me as Princess Awesome," or something else poetic...

Mummies must be growing in popularity because I just read something else recently about (ancient) mummies found in China with red hair and European genetics.

Wow; that is harsh. Makes you rethink some of those mummies that were found back in the day when archaeological practices were a lot more dubious than today...