Back in 09, archaeologists were digging at the site of near the village of Herxheim, in Germany. The site was from the Neolithic era, (7,000 years ago) when farming had spread into Europe.

The site was first excavated in 1996-99 so they expected to find much of the same. Instead what they found was a human bone.

Which, if you're an archaeologist, yay, right? But then they found another bone. And another. When they were finished digging, they had uncovered a mass grave of over 500 bodies. 500 bodies is a lot, but it's even more when you consider how small the population had been at the time the bodies were buried. Not to mention that Herxheim and other nearby settlements had been mysteriously and completely abandoned, ohhh, about 7,000 years ago.

So what had caused this massive die-off of the population and subsequent abandonment? The archaeologists weren't sure.

Until they found the bite marks.

Yeah. The mass grave was a mass cannibal grave. The bones in the mass grave had been chewed on, been cracked for their marrow, even had marks on them that suggested they had been spit roasted.

Cannibalism was extremely rare in Neolithic Europe (why would you need to eat people when you could grow your own food) and yet, here there was not just a single case of it, but a massive amount of it. 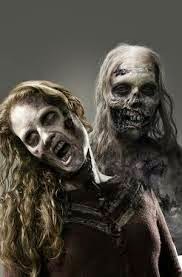 What country or people could've invaded and done that? Very curious.

Makes me think of the eaters of the dead aka 13th Warrior. Well that or Zombies and if it was Zombies good on them for containing the outbreak. :D
Matt @ JC's Book Haven.

Dang that's creepy. but it sounds like a story just waiting to be written...

Wait a minute. I heard a really great cannibal joke a couple years ago:


"You're Mother In Law is terrible."

"Then just eat the potatoes!"

In other news, that was freaky. The bite marks, that is.

OMG, I spelled your wrong!!!! All the grammar rage!

My eras may be mixed up...but wasn't that a time of massive die-offs? Of the mastodons, tigers...? (Maybe that was 50 millennia earlier...I'm old...I forget)

People may have been easier to hunt than the wily foxes that were left.

Hmm, that picture is much food for thought :)