In Which The Front Row Writes


The Front Row is a writing group I belong to, made up of my MFA peers, the ones I walked across the stage with in Januray *sniff*

We're called The Front Row because, shocker, that's where we always sat during lectures and stuff.

Anyway, I blog fairly regularly and so do my pals, so were tying a new blog series where we take a topic and write about it.

I took Monday, (because it's super easy for me to blog on Mondays) and the theme this time is WHERE WE WRITE.

I used to write kind of all over the place.

Well, I used to write on the couch with my laptop and my pups on either side of me. It was great. But also distracting because the TV was right there and sometimes Brother plays video games.

And, I mean, I can write while watching TV or video games, I just am not very prolific when all that's going on.

And over the last 5 or so years, I've gotten away from writing on the weekends (unless I really have time (which, let's get serious, I never have time for anything anymore. I am busy busy busy)) and I pretty much never write in the evenings (I think the last time I did serious evening writing was in 2009, the first time I did NaNo. I would come home from work, sit on the couch and punch out my 1600 words. But that was back when I had a 1.5 hour commute (one way) so a lot has changed since then)

So now, I pretty much do all my writing at my desk.

Which is good. I love my desk. 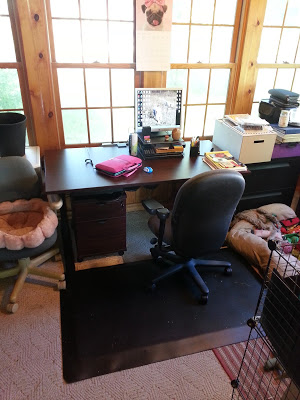 I've talked before about how it's an uplift, so I can raise it up to stand if I want.
But it also has a ton of space. I have my little netbook on there, to keep my gmail open (this is a habit I developed during my years of querying and it has stuck fast) my current notebook for whatever novel I'm working on, knick knacks (of course) and a box to the right which is filled both with used notebooks and folders, as well as brand new notebooks and folders for whenever I need one.

Also, the windows are great (except for when it's really cold in the winter, or when the sun hits the screen during a certain time of year) because I can watch the birds at the birdfeeders.

So, yeah. That's my writing space!

Here's the schedule for the rest of the Front Rower's posts:

And it looks like the dogs still flank you when you're writing.

Ooh, I'll like this topic! I love getting to see writer spaces. All those windows would be awesome. My desk faces a wall- but there's a corkboard w/all inspiration photos, so that helps.

What a great idea to get together! Love the logo too. Where I write depends on my mood. Sometimes it's in my office, other times at the dining table and sometimes in the garden. Great first Front Row post. Thank you.

Very cool. The desk looks cleaner than I remember. :)

What a clever name for your group!

I've never been able to write amid distractions. Fortunately, my dogs have learned to be foot rests that only move when I get up. LOL.