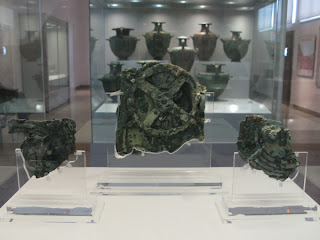 No one can really agree on who made it, though it's likely to be Greek since its instructions are written in Greek, but there's also pretty strong support for it being Sicilian.
The machine supposedly is used to figure out astronomical positions, which is no big deal until you realize this was created before anyone had discovered how planets and junk moved.
So, more or less, the machine had a function that no one alive during that time would've understood.
I mean, look at this crazy thing!


I love cool crap like that, things that throw a wrench into our understanding of history and the world. Good times.
.
Posted by Sarah Ahiers at 7:00 AM

You know so much cool stuff! Thanks for sharing!

So Atlantis was in the Mediterranean, not the Atlantic?

This might be the completely wrong era, but is it possible the Library of Alexandria might have had more recorded technology, but because it burned they were set back many years in technological advacments?

Ha, maybe it was the first television remote control? They have certainly come along way with those things.

I'm with Leah on this one; I immediately thought time travel as the likeliest explanation - however unlikely that may be.

Clearly, the Greeks were working on the first TARDIS prototype...

(*is happy to toss out a Dr. Who reference even though I've NEVER seen it...*)

Play off the Page

but i think that the ancients knew sooooo much more than we like to give them credit for. and there are da vinci's who never get their damn credit.

According to the British Archaeological Super-Squad, it's actually a time keeping device that tells you when it's Beer O Clock. Very clever, the Greeks.

Oh, very cool! I think there probably WERE societies that understood the planets and stars but the information got burned or destroyed or 'debunked' with the Crusades (when it became lethal to believe science)

I think Vic's got it right: this is the product of a pre-Jesus Greek da Vinci who not only conceived futuristic devices, but also had the means to construct them.

No, I'm kidding. Clearly, it was time-traveling aliens.

Didn't come from Amazon then ...