I'm actually surprised it's taken me so many weeks before I dove into one of my most favorite weird things. What's that you ask? Cryptozoology!

For those not in the know, Cryptolzoology is the study of hidden animals. Cryptozoology is the reason animals such as the panda and the okapi were discovered.

Today cryptozoology mostly centers around possible animals like Sasquatch etc, but there is also a lot of focus on Lazarus animals (animals that were presumed extinct and rediscovered alive. One of the most famous cases being both species of the Coelecanth)

So expect to see more cryptids in upcoming Wednesday Weirds.

Today, we're going to talk about one of my favorite cryptids, the Orang Pendek.

Orang Pendek is an animal that reportedly lives in the remote forests and jungles of Sumatra. Orang Pendek translates to mean "short person" because anyone who's seen it will tell you it's just like a little ape-man about 3 feet tall and covered in orange hair. 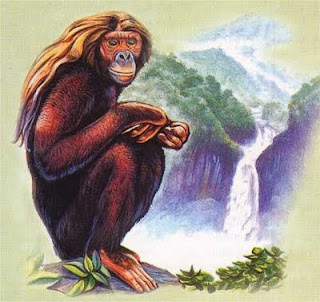 So it's just an ape, right? Yes and No. What's so awesome about Orang Pendek is that it's bi-pedal. It walks on two legs just like us.

So you say, OK, sure, maybe there is a little ape-man running bipedally down there and maybe there isn't. No smart people actually believe in it right?

Wrong. In fact, there have been so many eye-witness accounts of Orang Pendek that both National Geographic and Fauna and Flora International have sent teams for evidence gathering missions. The Fauna and Flora one lasted over 15 years. 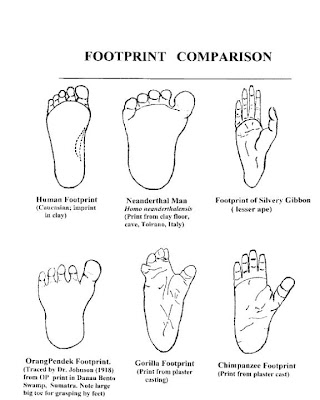 What you have to remember is that the forests of Sumatra are amazing at hiding things. Scientists who live down there to study the Sumatran tiger or Sumatran elephants, animals we know exist have sometimes seen Orang Pendek more frequently than these known animals.

So if a frickin elephant can elude discovery in the jungles of Sumatra, it's certainly not difficult to believe a a little ape could, either.
Posted by Sarah Ahiers at 7:00 AM

I think I saw the Orang Pendek in a bar once. Either that or she really had too much to drink.

Seriously though, I'm always amazed at how well some animals have managed to stay hidden. Even a couple of human tribes in the Amazon had stayed hidden until deforestation brought them into the "light". Now they gladly trade with the outside world for clothing and blades.

Not sure if that's a good or bad thing.

They also have pretty good coffee.

Look up the Tree Lobster, if you want to see a really gross Lazarus creature.

Interesting stuff Sarah--I can now impress others with Cryptozoology. Now off to locate that Orang Pendek...

Think this is strange, over 80% of the oceans is unknown. I bet there is some surprising stuff lurking in the deep waters of the world.

You had me at Coelecanth.

My all-time, most times hit post had to do with wanting opposable big toes.

The ocean came to my mind as well. All the unknown creatures at the bottom...

So cool. I totally believe there are tons of undiscovered creatures of there.

I've seen the way my cat hides when it's time to take him to the vet. If monkeys have any sort of self-preservation, I've no doubt they can stay hidden even better.

That is so cool! I love the fact that we don't know everything about our planet yet - gotta keep some of the mysteries! :)

This is SO interesting. I love the idea that we haven't discovered everything.

How boring would that be?

I feel like Destination Truth did an episode on this, but I can't be sure. I can believe that there are many things out there undiscovered. We hike in northeastern Oregon every summer and the trees are so thick in parts that it's hard to see the person in front of you or next to you...I can almost believe Bigfoot exists during those treks. So Orange Pendek? I'm buying it. Or at least I'm intrigued enough to google it and spend an evening blog hopping - see what you've started? ;-)

I believe the correct terminology these days, according to TV, is "Squatch". Also, they apparently love pizza and buffalo wings.

I could totally buy that Pendek's exist. Jungles are crazy good at hiding things.

I believe that there are plenty of creatures we don't know about for sure yet. And whilst it's great to discover them, sometimes I think there's a reason why they won't let us find them.

i'm a total crypto-believer!
how arrogant can people be to even begin to think we have every flora and fauna catergorized!?!?!
and orang pendek- did they cover that on monsterquest or destination truth??? :)
whoohoo! spread the truth sister!