Yay! It's been awhile since I've done a strange creature/monster Wednesday Weird so let's get to it!

Today, we're talking about the Enfield Horror or monster.

In Enfield, Illinois, at about 9:30 pm, in April 1973 Henry McDaniel and his wife returned home where their two kids told them that something had tried to get into the house. They had heard scratching at the door and walls.

Henry attributed it to a dog or maybe a cat, but shortly after that the scratching returned and Henry opened the front door.

It wasn't a dog or a cat, but instead a creature like he had never seen before. He described it as having "three legs on it, a short body, two little short arms, and two pink eyes as big as flashlights. It stood four-and-a-half feet tall and was grayish-colored. It was trying to get into the house!" 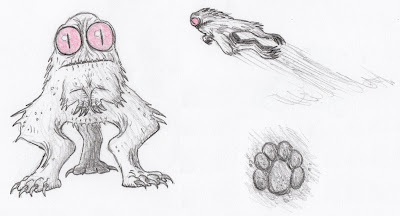 Henry, not being dumb, slammed the door in the creature's face and ran to get a flashlight and his gun. He shot at the creature four times and would swear later that the first shot hit the creature, which proceeded to hiss at him and flee in long leaps across the yard and to the trees.

Henry then called the police.

The police normally would have dismissed his tale, except for the fact that there were long scratches in the siding of the house and the door as well as tracks, similar to dog tracks except with six toes instead of four. And, on top of all of this, the police had also received a call earlier in the day about a creature matching Henry's description that had attacked a boy, shredding his pants and shoes with it's claws.

The next month, Henry McDaniels would see the creature again. This time the creature stayed away from the house, walking down nearby railroad tracks before it bounded once more into the night.

After this encounter, word got out about the Enfield Monster., attracting monster hunters and tourists from all over, filling the small town with strangers equipped with guns, looking to shoot a monster.
Things quickly got out of hand and the police were overwhelmed, but finally when things died down once more, 4 more people spotted the creature, including a local radio director who caught the creature's cries on tape.

After that, there were no more sightings.

It is interesting to note, though, that in 1941 in Mt. Vernon (only 40 miles away from Enfield) there were reports lasting a year of a strange, baboon-like creature terrorizing people and attacking livestock. The "Mt. Vernon Monster" was reported of being able to leap large distances in one bound, much like the Enfield Monster per Henry McDaniels' report.

There were theories that the creature could have been an escaped kangaroo, explaining the three-legged appearance, but McDaniels swore it wasn't, since he had actually owned a pet kangaroo when he had been stationed in Australia.

A deformed albino ape of some sorts? Yeah, here in the states that sounds really unlikely.

well, you never know what's out there and just because it seems crazy doesn't make it untrue.

I think he's adorable. Is that wrong of me?

It's a shame no one was able to capture it. I wonder if it wasn't an albino baboon or orangutan. I think they have some piercing screams.

I'm with Hart - aawww cute. It probably just wanted to ask directions. It had lost its mommy. It did knock politely. Have a great weekend Sarah. I loved this post. Thanks for sharing.