In 1945, in Irkutsk Siberia, a geological discovery was made that still baffles scientists today: te Potamsky Crater, also sometimes called The Eagles Nest because of it's convex shape and round mound in the center 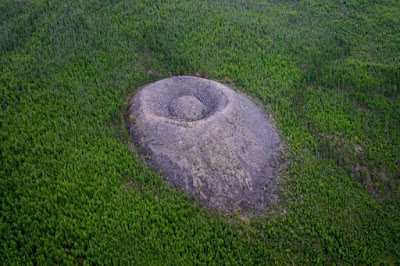 The current theory of the crater's strange shape is a meteorite strike, but if so, it's shape is unlike any other meteorite strike and no evidence has been found to otherwise support the theory.
The crater's edge stands 80 meters tall and 150 meters wide. The depth around the mound in the center is 10 meters. 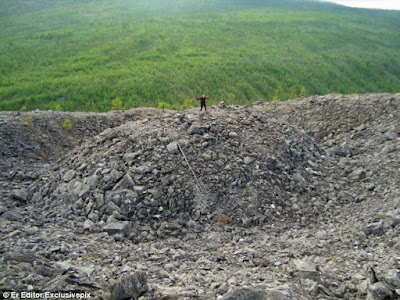 The crater was discovered by Vadim Kolpaknov and since then many expeditions have been made to sample the site, including one in 2013 but because of the remoteness of the area, there weren't enough people living in the area to remember how the crater could have come about.

Some other theories include that the crater was a gulag (though there were never any in the area) or that it was a slag heap (though, again, not enough people living nearby to create one.)

But the area is not a volcanic region which pretty much rules that out. Plus, scientists think the crater is relatively young: formed between 100 and 500 years ago.

It's possible the crater could have been a result of the Tunguska meteorite, which fell in the region in 1908 and whose crater was never found. But of all the numerous samples collected, none have been meteoric.
On top of that, scientists suspect there is something buried with a high iron content and ferromagnetic materials about 100-150 meters below the surface. Possibly a meteorite or another dense object.
And if all that isn't weird enough, let's put the cherry on top. The crater is considered to be "alive". That is, it's shape constantly changes by rising and falling. And, apparently nearby trees tend to grow abnormally fast.

Hmm, interesting one. The shape and scale has the morphology to be a volcano, but if they don't have any igneous rocks, that's almost certainly out of the question. As for a slag heap, that's very possible, but again not particularly probably.

The other thought is that it's the end of some sort of underground waterway system. So fluids pump in at a distant location and drain out here. There's debris pile up, and the constantly changing shape.

Or, you know, Aliens is a good answer. It totally looks like a giant kid with a sand toy just dumped all their sand there...

They better not go diggin' too deep. They might tick off that alien resting peacefully below

Obviously there's an alien spaceship sitting underneath that pile of whatever.

That's intriguing to say the least! Maybe Thor came down and slammed his hammer into the ground ... in a circle. (Lame idea, but it's the only one I've got right now. Early morning, you know.)

The high iron content would result in fast tree growth so that doesn't surprise me.

My guess is it was a large object that broke apart upon impact. The 'softer' outer shell made the crater and the denser, iron alloy remained intact covered by debris.

Now I want someone to go out there asap and dig- I want to know what's under there! Hmm...sounds like a good movie plot for a sci-fi, where what they dig up, they wish they hadn't...