In Which I Embarrass Myself A Bit

So during my lunch breaks (you know, when I move from the office to go sit in the living room) I have to find something to watch on TV when I'm eating. Except there's nothing worth watching on at 12 or 1 o'clock during the weekday (and no, Wendy Williams doesn't count).

So I use our lovely DVR to tape shows for me purely to watch during my lunch breaks. Tuesdays are always the best day because Monday evenings are a big DVR night. Intervention? Awesome. Castle? Even more awesome. Because it's about a writer and the writer is Nathan Fillion! If you don't love Nathan Fillion, you are not human. 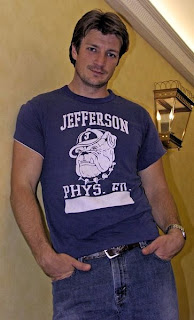 But lately I've been pushing Castle back a day or two. Why is that you ask? Well I've found a new lunch TV show...

Make It Or Break It 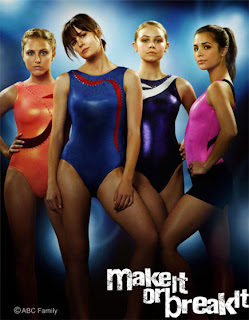 Take it all in. It's as fantastic as it looks.

I mean, what's not to like? For example - On this week's episode, Payson (the blonde in the blue leotard) had to start going to Public Highschool. Last season she broke her back and she's done with gymnastics. FOREVER!

Anyway she goes to gym class and the gym teacher recognizes her (she was headed to the Olympics until her accident). Then typical bitchy popular girl is all "hey everyone watch me do this back handspring I'm a cheerleader blah blah" and she does it and it's crappy.

SO THEN, and you won't believe this, the gym teacher makes Payson tell the popular girl what she did wrong! Awesome.

Later, the popular girl is daring Payson to show them a back handspring (which of course she can't, she's in a back brace) when Payson's gymnast friends (the ones above) show up and put popular girl in her place by doing super back handsprings! YES! Fight bullying with gymnastics!

Seriously I'm not even embarrassed by how much I love this show. It's full of so much melodrama and teen angst, it's impossible not to love it.

Let's see, how can I relate this to writing... hmmm... sleeping with best friend's boyfriend? No... Mom having an affair with gymnastics coach? Definitely not. Ah, here we go.

Nicky, cute boy National Champion is angry because one of the girls is blackmailing him for giving Payson cortisone before she hurt her back.

Anyway, he's actually a nice guy and a good gymnast and he had this to say to Kaylie, the girl National Champion who's kind of in love with her new found fame:

"Imagine if you focused as much on improving yourself as you do selling yourself". Oh ouch.

It's a good point. Yeah this blog post is a stretch in relation to writing, but the reason it is is because I'm still behind from doing all that writing on Sunday. And really, isn't that writing the whole point of being a writer? Though I LOVE this writing and all my blog friends. Which is why I'll always have something, even if it's just a chat about Make It Or Break It (and believe me, there will be more...) or some LOLCats 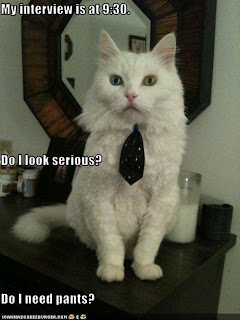 I gotta go - Lauren is doing a hiphop dance on the balance beam. Classic.

I'm a Nathan fan from way back in the FIREFLY series, and I LOVE CASTLE!

As for the other series, not sure my wife would let me watch a show about a bunch of hot high school girls getting hot and sweaty in the gym. I'll have to pass on that one (unfortunately).

i'd totes watch that show. But then we were talking about how it's like all those awesome teen riding books/shows.

Also, the first time i saw that LOL cat i LMFAO and then added it to my faves

I think that lolcat might be one of Dr. Bitz's cats.

Castle is pretty awesome, and mainly because of Fillion. The last episode was really good.

LMAO. The only way that could be any funnier is if they were fighting bullying with dance!

Lady Teebore watches Make It or Break It every once in awhile. I just shake my head. She gives me crap for liking 90210, then watches that?

I haven't seen any of those shows, but I'm now feeling a desperate urge to engage in fight bullying with gymnastics...odd, no?

Have you seen My Life as Liz on MTV? Funny stuff. Love that girl. And major teen angst. Perfect.

A few weeks ago, I spent my weekend watching all of Firefly and Serenity...it was joyous. Capt. Tightpants FOREVER!!

If I had cable, I would probably watch Make it or Break it. I love the angst and I love the 'nastis!!

Everytime I see a promo for Make It Or Break It I say I have to catch an episode. My neice is ten and a FANTASTIC competitor gymnast -- I'm amazed at what she can do at such a young age...and the drama in her life has already begun!

Posts like these are dangerous. DANGEROUS. If I watch any more tv shows, I'll have to give up sleeping.

Because of course I'm not giving up writing. :)

I agree with your assessment of Castle. Completely.

I'm a fan of Nathan Fillion, but it would be weird if I said I loved him!

DL - yes, firefly was awesome to the extreme

Anne - i gueeeessss maybe we can start watching them together, even if it means giving up a lunch show

Teebore - yeah that does seem pretty hypocritical of her...

Carolina - and this wasn't the only time they've done it! Last season they scared off some gang members. Or hooligans. It was pretty unclear who these tough boys were supposed to be...

Palindrome - what, pray tell, are foreos?

Nicole - Monday nights on ABC Family, i think it's on at 8 CST, but i could be off an hour either way

Carrie - i hear that. During heavy tv show season, i have to police the DVR multiple times a day, so we don't lose anything we absolutely can't miss

Alex - i don't think it would be that wierd. I'm pretty supportive of man crushes

It could be a new sunday show since we lost Bones to weekday viewing.

(By the way, your blog is terrific.)