Natalie Whipple had a contest this week which involved writing a scene for a picture she drew. It was fun and I hope there are more contests like that in the future.

Here's the picture she drew: 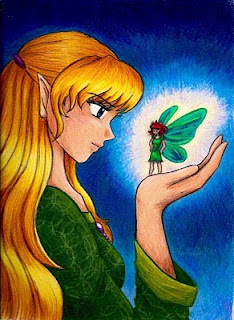 I really liked my entry and I hoped I would pull in a prize, but I wasn't a judge (though I will be when I have my own contests... (insert forboding music here))

So without further ado, here it is! (hmm I should probably come up with a title for it...)

Groggy, Elisa rolled over in bed and stared through sleep-heavy eyes at the glowing clock display.

3:13 am? What the hell…? But she heard them again, the quiet, yet insistent, taps from her window which forced her out of bed.

She leaned over to peer at the glass but it was too dark to make anything out and she’d be dammed before she turned the lights on at this hour.

Elisa cursed as she opened the window, jerking it past the middle where it always stuck.

Immediately a light zoomed inside, bright and painful against her eyes.

Elisa gave a shriek and swatted at the light, sure it was a bug, but bugs don’t swat back and this one slapped her across the bridge of her nose.

Even though it was a tiny slap, it still stung painfully.

“Ow! What was that for?” Elisa asked as she rubbed her nose with her palm.

“For swatting at me,” the light answered. It had landed on her shoulder and Elisa offered it a hand to rest upon.

Now that the light had calmed and ceased slapping, Elisa could see it was a fairy, and an angry one too, judging by the red color of her skin.

Great. Just what I need.

“What do you want?” Elisa asked.

“You’re the elf that kissed Brendan, right?” the fairy asked. Her hands rested on her hips and her tiny elbows pointed sharply against her wings which gave an occasional flicker.

Of course, all this went out of Elisa’s head at the thought of Brendan and the kiss. And how he had looked down into her eyes and how he smelled of horses but tasted of the chocolate ice cream they had just shared.

It was probably Elisa’s smile that told the fairy she had found her culprit. The fairy gave a very sharp, very high pitched shriek and flew at Elisa’s face. She grabbed Elisa’s hair and tugged it severely.

“Because I’m his ex-girlfriend that’s why!”

“You’re a quick one.” The fairy tugged her hair again and Elisa winced. “I don’t want you messing around with Brendan, or else.”

Angry, Elisa swatted the fairy away from her face. “Or else what?”

“Or else you’ll get more than just hair tugs and slugs to the nose!” The fairy turned, lifted up her skirts and bared her tiny, naked ass. Elisa couldn’t help but notice how each cheek looked like a pomegranate seed.

“Oh that is it!” Elisa shrieked. And before she knew it she had slammed her hands together, the fairy between them.

Brendan’s ex-girlfriend exploded in a shower of sparkles, light and a curious smell of Fritos.

Elisa thought perhaps she should feel something, shock at least. But instead she returned to bed and burrowed under her blankets.

No one likes fairies anyway, she thought as she drifted back to sleep, sighing at the reminiscent taste of chocolate on soft lips.
Posted by Sarah Ahiers at 7:00 AM

Fabulous writing! Pomegranite seeds had me laughing out loud. Keeping my fingers crossed for you!

As always, a delightful story. Your writing always makes me smile! I'm sure you'll win!!

alas i was not a winner. sigh. Onward!

I particularly liked the casual mixing of the fantastic (elves, fairies) with the mundane (chocolate ice cream, Fritos).


Regarding spammers, I definitely felt like I'd arrived when our blog started getting spammed.

Teebore - I know Twin said she wasn't too keen on the chick being an elf and the modern elements, but it's the way the story went. Typically i, too, am not keen on modern fantasy

Frankly, I'm scared of it, so I always enjoy seeing it done well.

Loved it, but now I am hungry. Anyone know where I can get come Fritos flavored fairy dust?

As for spammers, I have learned to enjoy the jokers and skip over the rest before deleting them all. The spam filter on my blog takes care of most of them anyway.

Garrett - well at the very least it was writing related spam.
And i, too, want some Fritos