In Which I'm Neurotic

I've been a neurotic mess for the past two or three weeks. Ask anyone who's spent any time with me.

It's because of querying, of course. I always forget how crazy I get right when I start querying something new.

I mean, I've been down this querying road before, so you'd think I'd be used to it by  now. And in a way I am*. But still, the obsessively checking the gmail is, like, extra worse this time.

But, last week, the neuroses lifted a bit. I felt less obsessive about the gmail, felt pretty good about how querying was going (which has been very good, so far. Part of driving force behind so much crazy, methinks) and was ready to start tackling the new WIP.

So I did. The outline was done (if rough. That middle, man. I dunno. I'm hoping something obvious will show up as I write. We'll see I suppose) and I was just wasting time and staring at gmail. So I dove in and wrote 1.5 chapter. 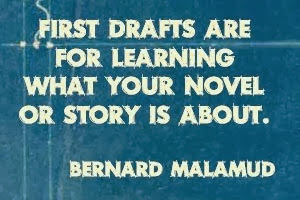 And it was pretty terrible. But I also liked it. I need to have 15 pages ready for workshopping for the MFA. Normally I'd just keep going, but I've told myself I'm allowed to go back and tweak this beginning as much as I want until I have to submit it. Then it's mostly off limits until I finish the whole draft.

So the next day I went back and started fixing the first chapter (I had to back up a bit, start a little sooner for some grounding and world building. Already it's looking better).

But then some crazy awesome stuff happened (involving twitter (which I don't want to talk about because of reasons I outlined here)) and BAM! All forward momentum stopped. I didn't even finish writing the sentence I had started. I was back to being neurotic.

But, luckily, it seems the neuroses weren't able to keep their grip. I was pretty much back to business mode the next day.

But, it makes me realize, if/when I get an offer, I am going to be pretty much useless for the next two weeks. I foresee that I will drive quite a few people crazy before it's all said and done.

How about you? Feeling neurotic about anything?


*So when you've done a lot of querying, rejections get a lot easier. But, unfortunately, the good news (reqeuests and junk) also don't feel as exciting as they used to. So it's still a rollercoaster, but the climbs and the drops aren't as high or low.
Posted by Sarah Ahiers at 7:00 AM

At least you can plan ahead knowing you'll be neurotic! That's a plus, right?

I'm keeping my fingers crossed for you! And my suggestion for the neurosis is to eat something sweet. Then salty. Back to sweet, and then- whoops, not helping am I? :D

Hey, neurotic is my middle name! not really, it's actually Morris, but it could be. The querying process is murderous--fear of bad news, fear of success... just keep plowing on, and best of luck with the process.

aw! thats what writing is all about! and its also its own therapy!! so satisfying when the kinks are worked out!

and love that quote!

And now for something completely different. Did you notice that the reflection of the farm house in Tuck Everlasting's cover totally looks like it's crying? It's like it knows the story will break your heart.

I love that quote about first drafts! Good luck with your querying process. It's so stressful! My book is out on submission right now and that's making me crazy neurotic. I'm trying NOT to check my email!

LOL! I've been there. Success followed by absolutely NO forward momentum... Well, we have to allow ourselves time to absorb life-changing moments, eh? ;) *fingers crossed for you*

You know in your heart what you've got. Tell those neuroses to take a hike.

I don't think there's anything wrong with any of this. Perfectly normal if you ask me.