Sometime between 1748 and 1763 the Shepherd's Monument was built on the grounds of Shugborough Hall in Staffordshire, England. It contains a relief sculpture of Nicolas Poussin's painting The Shepherds of Arcadia. 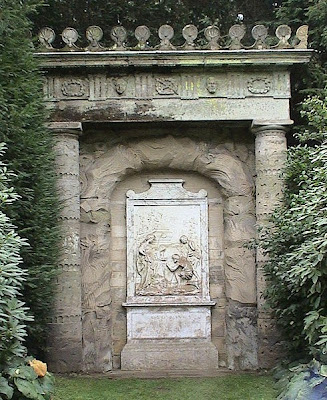 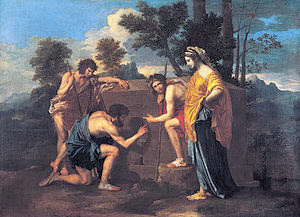 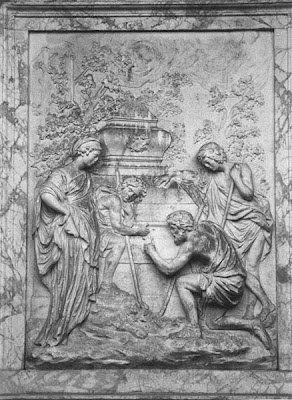 The monument was commissioned by Thomas Anson, but paid for by his brother George Anson.

Which, okay. Nice little monument, but where's the mystery? Where's the weird?

Directly below the mirror image of the painting.

A sequence of letters rest between the letters DM

The letters have never been explained and to this day remain one of the world's most cryptic ciphertexts.

On Roman tombs, DM typically stood for Diis Manibus: dedicated to the shades. But no one has been able to figure out what the remaining letters mean. Some people think maybe they're acrostic (each letter represents the initial letter of a word) but theories abound.

One theory is that the letters are a dedication by George Anson to his deceased wife for the Latin phrase Optimae Uxoris Optimae Sororis Viduus Amantissimus Vovit Virtutibus -- "Best of wives, Best of sisters, a most devoted Widower dedicates (this) to your virtues"

Another theory is that the letters stand for numbers which sum to 2810, the distance in miles from Shugborough to the so-called "Money Pit" on Oak Island in Nova Scotia (another Wednesday Weird post I have in the making).

None of the existing theories, though, whether plausible or just crazy, satisfactorily explain the secret message carved into the stone of the monument.

How frustrating- I want to know what it means! I like the idea of it being that shortened message to his wife. Romantic at heart here. =)

I like the possibility of it having to do with treasure.

Wow, the cool thing about this one is that it really could be a poem that he wrote to his wife and they had memorized it together because of it's super special meaning, and now all that remains are those letters.


Or you know, treasure.