Saint Germain was a count born in the late 1600s (though records on this are still unclear) and who seems to have unlocked the ability to live forever. 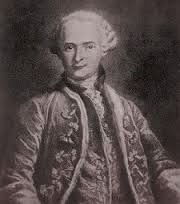 Born the son of Francis Racoczi II, Prince of Transylvania, he was supposedly an accomplished alchemist and also claimed to have discovered eternal life. Between 1740 and 1780 Saint Germain, who was quite famous, traveled throughout Europe – and never seemed to age.

Let's break down this mystery man.

He spoke 12 languages
He could play the violin like a virtuoso.
He was an accomplished painter.
Wherever he traveled, he set up an elaborate laboratory, presumably for his alchemy work.
He seemed to have great wealth, but was not known to have any bank accounts.
He dined with friends frequently, but was rarely seen to eat food in public. He subsisted supposedly on a diet of oatmeal.
He had recipes for the removal of facial wrinkles and hair dye.
He was linked to several secret societies, including the Freemasons, the Illuminati and Order of the Templars.

So all of that is pretty impressive, but not, say, impossible for a man of means.
So let's get down to the weirdness.

Officially Saint Germain died in 1784, but he would continue to be seen throughout the 19th century and into the 20th century.

In 1785 he was seen in Germany with Anton Mesmer, the pioneer hypnotist.

Official records of Freemasonry show that they chose Saint Germain as their representative for a convention in 1785.

In the French Revolution in 1789, the Comtesse d’Adhémar said she spoke with Saint Germain. He allegedly told her of France’s immediate future, as if he knew what would happen.
In 1821, she wrote: “I have seen Saint-Germain again, each time to my amazement. I saw him when the queen was murdered, on the 18th of Brumaire, on the day following the death of the Duke d’Enghien, in January, 1815, and on the eve of the murder of the Duke de Berry.” The last time she saw him was in 1820 – and each time he looked no older than mid-40.

C. W. Leadbeater claimed to have met him in Rome in 1926 and said that Saint Germain told him that one of his residences was a castle in Transylvania.

Thoughts and theories?
Posted by Sarah Ahiers at 7:00 AM

People posing as him maybe?

I don't know if he's for real, but I seem to remember there was a cult based on him in the 20th century. If I remember correctly there's always been a suspicion of fraud and money scams.

The dread pirate Roberts effect? Absolutely intriguing. And now I might need to write a book about it. Was he seen with a companion, perhaps someone younger (in training ).

Maybe he hadn't been quite dead yet, ala Monty Python. Very strange.

is he the Doctor?

There are 3 modern churches based in the western US that include the Count as one of their 'Ascended Masters.' A lot of mediums claim to channel Saint-Germain's ancient wisdom. Then there are the Theosophists dating back to the late 1800's and the infamous Madame Blavatsky.

As far a side kick, yes he had one, a young valet named Roger Barbaret, who was not quite so young at the end of the Count's adventures.

As for theories, oh yes, there are a lot of those too.