Because I have some fun news to share today!

What is it, you ask? What could it be?

I'm super excited guys. It's nice to know that when I actually put in the work to get something published (this was the first story I actually submitted anywhere) it can happen.

This is, hands down, my favorite short story I've written. It's also the short story that people who have read it tend to remember the most. People refer to it as "the hole story", which is a pretty accurate description.

I've mentioned it in posts here, here, here and here (where it was picked as editor's choice on OWW).

In that third post, which was mostly about how my wordle cloud for it ended up being a creepy, ominous cloud that was a perfect visual representation for the story itself, Twin had stated that when it was published she would make me a nice frame with the wordle cloud. 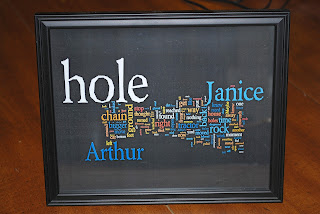 Yay! Thanks to everyone who's ever beta read it for me or offered me advice on dealing with submissions. YOU ARE ALL AMAZE BALLS. Glitter in the air for all!

CONGRATULATIONS!!!! I knew you would get this! I just knew it. I'm so happy for you.

You should've written me sooner!!

I'm putting the finishing touches on the OWW newsletter today. I'll go back and include your announcement.

Email me and let me know if there's anyone (from OWW) you want to thank or acknowledge.

Congrats, Sarah! I remember this EC.

That is so exciting. Congratulations!

Hey, congrats!!! Can't wait to read it. Intriguing title for sure. Oh,and where did you find that hilarious, over-caffienated lady?!

Congratulations, Sarah! You say it will be a downloadable ezine as well? Great!

Congratulations, I love this kind of news :-)

That's a great gift, too!

Yay, you! That is fabulous news. Have a great holiday, Sarah!

Fan-freakin'-tastic Falen!!!!
I'm so happy for you, and you so deserve this :) Sends celebratory cookies your way!

P.S. Oh, and I hope you're enjoying Rot and Ruin. I loved that one!

Congratulations! It's nice to know hard work and talent pays off! Keep up the great work!

Congratulations!! So happy for you, and looking forward to reading it! :)

Official blog congrats (as opposed to the other congrats I already offered you).

Also, props to Twin for the frame. Nice job.

I wish I could think of a less cliche thing to say than Congratulations. But I can't.

Congratulations to you, Fancy Lady! I remember that word cloud, what a cool present :)

That's an awesome frame! Congratulations on the publication!

The clip is perfect! That is AWESOME! Congratulations.

FANTASTIC! I'm so thrilled for you. Yay yay YAY!

Hey! Super congrats to you, my friend! That is FANTASTIC! Here's to deals--whoot! :D <3

Congrats! This is so exciting!

I've decided that I need to go on vacation more often because good things have happened to TWO of my blogging friends while I was away, and I still have 300+ blogs to get through!

Just catching up on my blog readings, and it appears I missed this huge announcement!! CONGRATS!!!