In Which Characters Are Dragged Through Hell

So yesterday we discussed passive characters and fixing disasters that are (hopefully) brought about by the MCs trying to fix things.

Another trick you can use to force your characters to remain active instead of passive is to put them through hell.

And now I will use an example from my favorite of all favorite shows...

MAKE IT OR BREAK IT!

That's right! And you forgot all about it...

So if you remember from last time I discussed the awesomeness that is the show (BTW, I'm now making Twin watch it with me. Converting the unsuspecting, one person at a time...) Payson broke her back in the season finale last season and her doctors said she wouldn't ever do gymnastics again. Which sucks for her because she was a favorite for the 2012 Olympics. 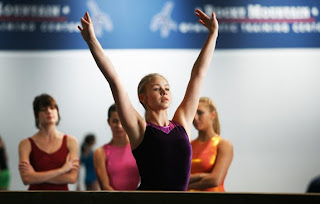 So Payson tries to pretend it doesn't bother her, but of course it does and she alienates her friends and family and breaks all her trophies and refuses to even go to The Rock to visit the other gymnasts or consider being a gymnastics coach.

So things are crappy for Payson.

Then, her pseudo boyfriend tells her about this back surgeon in LA who is the best in the world. So even though Payson and her parents decided she wouldn't see any more doctors, Payson gets her hopes up about this doctor and convinces her mom to allow her to get a consult.

The new super doctor tells her that he agrees with her original prognosis. No more gymnastics.

So Payson is broken hearted again.

Payson then has to go to public school, because there's no point to being home schooled anymore. She hangs out with a bit of a bad crowd and gets in trouble based purely on association, but this helps her realize that she can't spend her whole life thinking about how she can no longer be a gymnast. She has to move on, and find something else she'll love just as much.

So things are looking up for Payson, she's making new friends, joining clubs at school, gets to go to Prom and doesn't even have to wear her back brace at the dance. 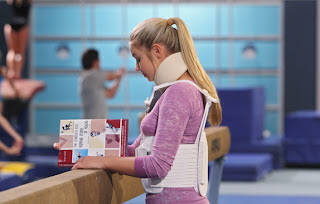 And then, a doctor from Europe calls Payson's father and advises them that she believes she can perform an experimental surgery which will allow Payson to compete in gymnastics again.

Payson is excited about the chance, but she catches her parents fighting over the idea and because she doesn't want to be the source of their arguments or their fear she tells them she doesn't want the surgery.

If we look over all of these scenes (which of course have happened over the span of 8 or so episodes) we can see that every and any time Payson starts to feel good, or happy or things start to "come up Milhouse" for her, things then go to crap.

If you continue to throw horrible things at your characters, drag them through hell, then it's difficult for them to remain passive.

But you want to be careful that you allow the characters to make a mess of things as much as possible. Yes, the doctor calling from Europe is a bit of Deus Ex Machina (I LOVE saying that), BUT it's going to come down to Payson deciding if she wants to take the risk of surgery (a surgery that could possibly leave her paralyzed) in order to get another chance at her lifelong dream.

If your characters try and fix the bad things that happen to them, make their solutions cause even more problems (for example, Payson's big let down at the LA surgeon's is due purely because she fully believed she would be fixed and convinced her mom to bring her to LA for the consult. She caused herself that moment of heartbreak).

Again these are all things I try to keep in mind as I'm drafting, but truthfully I'll have to go back in during revisions to heighten the drama in each scene.

Does anyone else follow the "drag your MC through hell" approach to prevent them from remaining passive?

Or you could pull a Days of Our Lives circa 1997 and make someone possessed! They did it to one lady 3 times! Oh, Malrena, how you've suffered - hah!
I am so jealous of you watching this show - it sounds like the best thing ever :D

So was the doctor in L.A. Jack? If he had his jeard no wonder he wouldn't help her.

Palindrome - LMAO and no it wasn't. BUT the europe dr is Troi from STNG

Great post Sarah. You made me think about passivity yesterday, now I have to drag my MC through hell today. Although I think I've already got that covered a few times. Separation from the man she loves, attempted kidnapping, attempted murder, more separation right until the next to the last page. What do you think? Is that enough?

I guess Rob Zombie agrees with you! Haha...couldn't resist. Always thought that was a freaky title.

Yes, I love to torture my victims. The worse, the better!

My hubby and I totally watched the first season of Make It or Break It, but we kind of petered off this season. Not sure why...though I'm still kinda keeping up with the story. And Sasha. *grin* But it does weird me out that what's-her-name's character is Summer. Still not used to my name being on TV...

I just realized I wrote "victims" instead of "characters." I'm not a creepy serial killer, promise!

Oh and speaking of dragging characters through hell, have you seen "Drag Me to Hell?" HA-larious!! I was laughing so hard my stomach hurt.

@Palindrome - Yes, drag me to hell was awesome! So gross and scary and over the top - I was dying when that gross old lady was attacking her in the car - LOL!

What a lovely example of a synopsis.

I have dragged my characters through hell and back, but I didn't realize it was keeping them from being passive. Good point.

I don't really think too much about the rules when I'm writing. I draw from a real life experience and I go with that.

I guess I'll have to pay more attention to the rules once my first draft is finished. Yikes!

Piedmont - just keep dragging them through hell until they're forced to change. Then it's enough. But yeah, that sounds like a lot for a romance so you're probably good

Palindrome and Joan - I have and it was good. But even though it was funny, the toothless old woman was really really gross.
really.

Kay - LOL thanks. we'll see it those skills translate when i really need them

My main character begins the story after being drug through hell, so he comes pre-motivated to be active not passive. But I do throw a few things at him along the way.

This is why no one is ever happy for very long in a Joss Whedon show. Happy people in a relationship are boring and passive. Like you said, you need those few episodes of breathing room where everyone's like "la la I'm in love" but before long...

Your boyfriend is your arch enemy. Sucks to be you.

I think that's the nature of fiction. Trying to make life really hard, the challenges insurmountable, and then giving the character a way to overcome all. :)

Alex - well then there you go! Being preset sounds like a good idea...

Teebore - well yes, but what do you expect when all you do is date vampires?

Elana - indeed. Or they die, but i guess that's overcoming them in a way

I like presenting my characters with several difficult choices, and making them pick one. I think this thrusts them out of the passive role and then gives the added conflict of putting them in a hell that they actually CHOSE. ^_^ Ah, sweet torture...

One for good..two for bad..in the lives of your characters. :) If fixing the problem was easy it would be a short story. Great post, Falen.

Ah yes. I just realized the other day that my one character just stands back and goes all whiny "uh..." But then smiles like an angel and grins and bears it. NO! So I am going to go back and make more disasters happen to her. Mwahahahahaha >:)

Barbara - forcing them to choose is a genius idea

Sharon - so true. But then i've had some lengthy shorts...