In Which I Go Shopping

So as soon as I realized I was almost done with the WIP, I went shopping for office supplies. I mean, who doesn't love shopping for paper and pens and all that good stuff? No one, that's who.

I picked up the below stuff, along with a new package of paper. 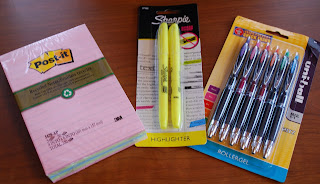 The one thing I forgot was a notebook, which I'll use to write out where, in specific scenes, I'll need to make changes.

Otherwise the pens are for line edits and any other writing I plan on doing with the revisions.
Except the purple pen. I gave that one to Twin to use as she acts as my first beta-but-also-more-like-an-alpha-reader person. She'll catch typos etc.

The highlighters are for, erm, highlighting things on the manuscript. Also I'm going to try highlighting changes in the notebook once they've been complete. As opposed to crossing them out, which would be my normal method.

The notecards are for making a list of scenes and playing around a bit. Mostly they'll be useful for figuring out where my chapter breaks should be and where I need additional scenes from other characters POV to break up the story a bit.

But the manuscript is marinating for awhile. So I'll just have to look at my pretty supplies and sigh.

Does anyone else feel the need to buy brand new supplies when you're starting a new project?
Posted by Sarah Ahiers at 7:00 AM

ABSOLUTELY!!! And a bag of mini Snickers too.

I feel the need to buy new supplies...whenever I see them. I love pens!!!! Oh and "back to school" season is my favorite. That's when I really stock up. Speaking of which...I need some more pens.

But I'm not kidding when I say, I'm now going to buy some more.

You're so much more organized and methodical than me, I love it. I just grab my manuscript and the black Pilot Precise (extra fine) in my back pocket and start crossing things off, scribbling notes in the margins and re-writing lines above existing ones.

I do love buying new pens though, even if they are always the same kind of pens...

Piedmont - yes, snickers would have been a good idea...

Palindrome - those were the pens i bought after i texted you

Alex - i know! I can't believe i totally forgot to buy one when i was shopping

I love office supplies! There are so much fun. Weird but true.

There is nothing like brand new paper and pens. The computer is great, and I prefer typing my work into the computer (who can live without 'backspace' and 'copy/paste' anymore??), but I never want old school writing implements to go away, ever. (*nods and smiles...and wishes she had a Snickers bar...*)

Just a new notebook is all...up til now. I might be changing my ways. You planted an urge. :)

I adore office supplied. Co-workers used to tease me about all the things that would show up on my desk.

btw, you have a little gift over at my blog today. :)

I love those big post-it notepads! They're my fave!

Yes! I love going shopping for office supplies. I left you an award on my blog. Congrats!

My revision kit was recently picked up at Target: 3 packs of index cards, a 20-pack of colored Sharpies, and a 2-lb bag of peanut M&Ms.

New supplies just make me feel more excited about the process! Although the M&Ms are especially key.

Southpaw - office supplies are some of the best things to shop for!

Nicole - no kidding, right? It would be horrible if they took away pens

DL - to be fair, i got the highlighter idea from Natalie Whipple

Roni - ah those poor co-workers who just didn't know what they were missing.
Thanks! I will check it out right now!

Elana - good to know! The selection was limited so i've never used them before. i hope i like them

Courtney - Thanks so much! I'll be right over