In Which I Don't Wear Pants? 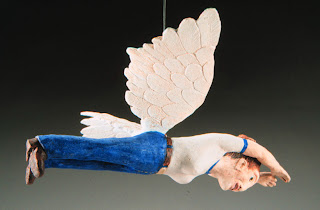 When I was younger and used to write, I could sit in front of a blank sheet of paper and write whatever struck my fancy and make it into a viable story.

I think for the most part I can still do this, a blank piece of paper - or in my case, a blank word document because I am not a hand-writer - isn't something that stresses me out or causes writers block.

I also used to start stories with just the barest understanding of what my plot held. I'm a great starter and love jumping into something new when the excitement and idea is fresh.

But over the years I learned that if I jump in too soon, the excitement that comes with a new piece will wane and I'll be left with a story that I still like, but typically have no idea where it's going. I'll keep plugging along until I get stuck, and then typically, I would stop.

After a while I told myself I wasn't allowed to just start things willy-nilly until I gave them some more thought. And then that morphed into not really starting anything until I have at least a bare bones outline (most recently I now know that I need to have character conflicts, motivations and goals at least internalized if not written out if I want the story to have any sort of chance).

So what I'm getting at is, I used to be a "pantser" (flying by the seat of your pants sort of writer) and now I no longer am.
I think most writers fall into one or the other category - the pantsers or the... what are we called? Non-pantsers? sure...

I wonder, are there any other writers who fall in between, or, like me, started out as one way but then discovered that the other way was much more suited to them (even though I still sometimes consider myself a pantser - short stories especially)

What about you? Pantser or Non Pantser?

Email ThisBlogThis!Share to TwitterShare to FacebookShare to Pinterest
Labels: Becoming a writer

What a great post!!! I was a panster, still am to some degree, but now I find, especially with this new WIP I needed an outline, at least a story arc anyway. (And I think non-pansters are called "outliners".)

I definitely got me some pants, but for some reason all of my teachers keep telling me to "outline!" Well, psht, they can't take my pants from me.

It's actually kinda' funny, because I love not knowing what's going to happen, and once I know my story arc that's where I have trouble continuing to write.

I'd definitely say I'm a mix, depending on complete the story idea hits me. I know from my own experience that sometimes what I come with as I go is better than anything I could plot out. Most of my outlines end up garbage anyway. My NaNo '09 book is a great example. Had a good outline, knew right where to go...and to read it's 65,000+ words of glory today is to read about 39 different plot directions. Such is NaNo, I suppose, though...

A little of both her. I start out a panster but quick move into a non panster so I can make better use of plot line.

I used to be more of a Panser...I'm sorry, Pantser, like you. Recently, though, I've been planning my stories carefully.

I read a blog post recently with a youtube clip of all the steps for writing a novel. It's so simple, yet brilliant. And I have a new zeal for my WIP and finally know where I'm going.

As is appropriate, given my hatred of pants in general, I am definitely a non-pantser (or the less colorful "outliner" if you will), and always have been (not that I usually write down the outlines, but they're in my head).

I rarely write anything without carrying it around in my head for at least a few days. I don't know the whole plot or every character or everything, but I know the beginnings of the story, a rough idea where it's going, and the main character, major goals and personality, before I "write" one word.

As a result, I was always TERRIBLE at writing exercises in creative writing classes. Since everything I write is already a second or third draft before fingers even touch the keyboard, when I'm denied the time to gestate an idea in my head and am forced to write out that first draft off the top of my head, it's invariably just AWFUL.

Definitely pants - preferably sweats!
I need to know where I am going before I begin writing. The idea still feels fresh, as I don't yet know the details, but the overall storyline is conceived at that point.

I'm kind of inbetween. I know the general arc of the sotry and the end, but not all the stuff in the middle!

I'm a hybrid. I need to have an idea before hand where I'm going, but so much happens along the way that I didn't foresee, I have to leave room for that.

Piedmont - i try not to keep my outlines too specific - so i may have scenes listed out but it will say "MC falls off cliff" so i know it needs to happen in that scene, but not how or when, so i can pants all i want within the scene

Aching - i wonder if it's an age thing? I used to pants much much more when i was in highschool and College. For me i think it's a balance, i can't know too much, or it's no longer fun, but if i don't know enough ahead of time, i get lost and frustrated.

Summer - i outlined for nano 2009 :\ It worked well for me, though. Maybe next year i'll just dive in and see what happens. i guess it will depend on if something on the backburner is ready to go yet

Southpaw - indeed. i think if i don't have a general idea of a plotline laid out, then the story usually doesn't get very far

Teebore - i can honestly say i rarely have any sort of lines written in my head before i write them. For my vampire WIP i did have one line that i knew would show up at some point (the - "To die is to forget. And we can do neither") but that is a rare occurence. It baffles me that you have paragraphs written in your head before you write them

Palindrome - ooh what blog was that on? i like the first 4-6 steps of the snowflake method, purely for the character development it makes me do. And since character is often plot, it helps.


Alex - me too. I have a pretty strong feeling that if i were to just jump into something without having an idea of the story arc or plot, it would flop quickly

Aubire - thanks! Yeah the middle stuff is always a killer for me. I've been really trying hard to mimic a three act story structure and that seems to help me with the middle.

PS: Left something for you at my blog.

Here's the link to the video...I still can't figure out what blog that was...I read way too many!

I don't really know where I fall, in all aspects of writing I come out undecided or labeled freestyle. I do things my own ways when an idea strikes it provides me immediately with a plot, characters and a few preplanned scenes. That's just how it's always been.

Elle - yeah i think leaving room is always a good idea, even for people that write really strict outlines (of which i am not)

Summer - thanks! I go stop by right now

Palindrome - damn my stupid speakers! I'll have to wait to watch it when they start behaving again

I'm a half-pantser. A shortser? I write a teeny bit of character or plot bio and then jump in. A Daisy Dukeser? Now there's an image.

Barbara - Shorters is an awesome term, i think we should spread it about the interwebs

I can't write by hand - my typing fingers barely keep up with my thoughts as it is!

suzette - i can't write by hand either. Much too painful

I'm somewhere in the middle. I create a bare bones outline and then let myself make up a lot of stuff in the middle. Then I edit and rework what I've got.

Dominique - yeah that's usually how i do it. Or even if my outline isn't barebonse, i'm allowed to veer off track. The outline just helps me to know where i have to get back to