In Which I Am A Year Older

So it was my birthday on Sunday.
Yay.
To be fair it was also Twin's birthday - two minutes after mine.

And we share our birthday with a few friends. Also Ashton Kutcher, Laura Ingalls Wilder and Charles Dickens were also born on this day. Who knew February 7th was such a popular day to have a baby?

On Thursday our mom took us out to get manicures - not that any of us have nice nails, but it's still fun. 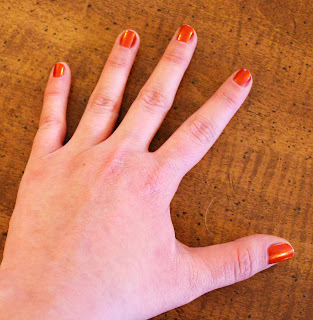 I'm never going to be a hand model...

In my fam we celebrate by getting presents (natch) and going out to eat at a restaurant of the birthday person's choosing. We'll be hitting Twin's choice later, hopefully when our youngest sister, henceforth known as Youngest Sister, comes home from a visit from Far Away College (aka Columbia in Oprahland (aka Chicago)). Twin chose Solera which is a delicious tapas restaurant. 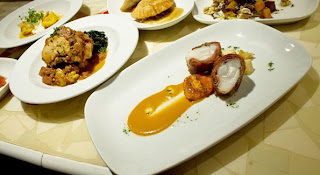 I chose La Grolla, which we dined at Sunday afternoon (because there was no point watching the Super Bowl when it was our BIRTHDAY...duh (also the Vikings weren't playing, so you know, what's the point?)). La Grolla is classified as Italian, and every time we've eaten there the food is so super duper fantastic you pretty much don't want to eat anywhere else, ever again. 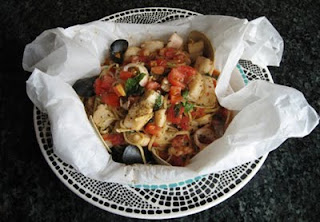 This is the dish (cartoccio) that Brother would kill a bear to get at. An honest to god bear...

The chef/owner was once a personal chef for Donald Trump and apparently Mr. Trump has good tastes.

As for presents, Twin got a new jacket along with Casino Royale and season 2 of the Venture Brothers. 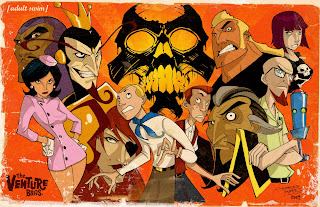 If you're not watching Venture Brothers, you need to rectify that IMMEDIATELY!

She also got dog training classes for Tula, who may or may not be an agility champion in the making. 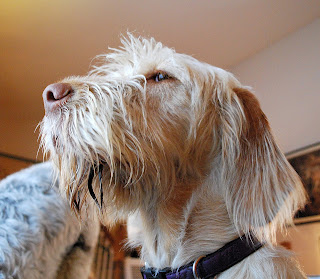 Together, we also got a Ladder, which doesn't seem like much, but we've needed a ladder for almost 2 years now to get rid of the trees growing in our gutters.

Our Grandma has started to give away some of her possessions in lieu of a birthday gift (aka, money) which is awesome because I'd much rather have some of her heirlooms than money any day.

This year we got these wonderful dishes that belonged to, like, her grandmother and therefore are really old. They're made out of carnival glass. 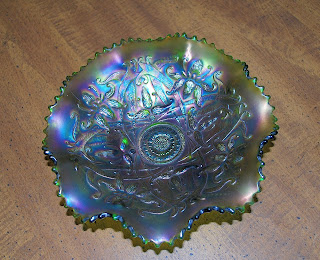 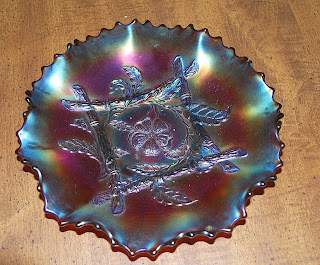 I got District 9 on blu ray and season two of Metalocalypse. 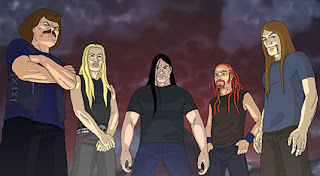 If you love metal, even a little bit, this show is for you

From Younger Sister I received a pretty hair binder and a journal made from REAL ELEPHANT POOP! 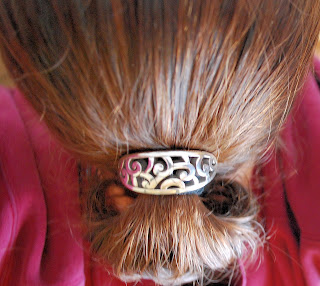 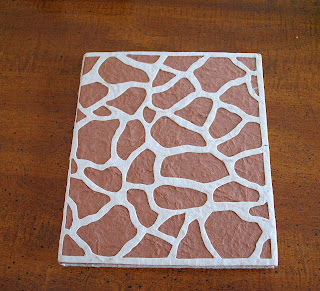 made from real poop!

You might be questioning the journal, but it's because I LURVE elephants. 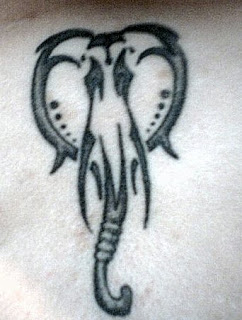 this was my first ever tattoo

I also got a framed print of Waterhouse's Circe Invidosa

It's hanging in my room across from my framed Waterhouse La Belle Damme Sans Merci. Awesome.

So anyway, that's how I spent my Sunday. There was also some Dexter watching as well as Call of Duty playing.

How was your weekend?

Also, as of the posting of this blog entry I have 47 followers, each one unique and precious.

When I get to 50 followers (which could be any time now) there will be a drawing!

Those of you who are already followers will have a leg up!

Hehe, trees in the gutters :D I went to my first ever tapas bar just this last year - what an ingenious idea! I love you plate. Yes, that's right, I am addressing the actual plate.
Hey, my baby LOVES elephants too! And my cat's name was Circe :) Which every vet ever would pronounce as "Serse?"
Did they draw one of the metal guys (the sassy redhead) with a receding hairline? If they did, hats off to them for keeping it real.

I love that pic of Toots where she's looking off into the future of her awesomeness.

Also, i would agree that you should never be a hand model. Something about that pic just looks aweful.

Joan - yes he does have a receeding hairline - his name is Pickles and he's the drummer. He's also from WI and does a comb-over with his dreds. It's such a hilarious show

Anne - well thanks so much for that... the sad thing is, that was the BEST picture i took of my hand, the others were much worse

I loved strolling through your birthday with you! You're a spoiled rotten brat! What's with all those fine prezzies and awesome dinners? I want YOUR birthday!

Happy Happy Birthday! 29 is a great year because 30 is still 364 days away. Live long and prosper! May only good things happent to you this year. Great query, great book, great contract!!!

Carnival glass is so interesting, and I LOVE Venture Brothers! My husband likes to randomly say things like Dr. Orpheus, and I sniggle (snicker/giggle) every time.

Happy belated birthday, and enjoy those tapas. Tapas are so amazing...

omg, those plates are awesome!! I would frisk me before leaving your place when I come to visit.

mmmm, tapas. Not as exotic as their name but every bit delicious.

I've never had a manicure...I've never had nails longer than my fingertips. Pedicures are great though...once I got over my aversion of people touching my feet. I still don't allow it...unless you're a professional.

Thanks for making me add two more shows to my Netflix list.

A journal AND poo?! TWO OF MY FAVORITE THINGS COMBINED TO BECOME ONE!!(I say in a loud booming voice) Not since P.J. Tracy have I discovered such a delightful combination.

My 30th year has been the best year so you only have greatness to look forward to.

Hmm...me thinks I'll have to check out La Grolla sometime.

Oh, and since you asked, my weekend was pretty good, even though my lazy Saturday was interrupted by a lot of stupid work calls, I lost the pre-Super Bowl poker tournament and the game itself was pretty lame.

Happy Birthday! That I-Talian dishe looked A-Mazing. (*mmm, I'm hungry -- what time is it?*) Looking forward to the drawing. Have a great day!!

HAPPY BIRTHDAY. It's sounds like you have a great day. So, does the journal smell like elephant poop?

Wow - that was some birthday! I love the beautiful dishes from your grandmother and the Waterhouse print. Happy birthday, Falen! :-)

Okay, now I know that my birthdays are boring. You did some amazing things. Congratulations-- Happy Birthday again!

That sounded like a fun birthday. Those plates are so gorgeous!

I spent my weekend working and making sausage gravy and biscuits. mmmmm

And I think I'm follower #50! Congratulations. And Happy Birthday!

Dangitall! I missed your birthday by a lot. Happy birthday!

Zen - darn tootin i'm spoiled! I make sure my family LOVE'S ME OR ELSE...

Summer - your husband just rose like 80 cool points in my opinion...

Palindrome - well it's not like my nails ever get much longer than that - i think my long years of playign violin makes them fragile and break worthy once they reach a certain point.
I thought you'd enjoy the journal. And i'm a bit jealous of the awesomeness you have been experiencing this year so i hope i get like half of that

Teebore - why are you taking work calls on the weekend? no, no...none of this is adding up AT ALL... and yes, you and Mrs. Teebore should hit La Grolla post haste. It's rigth next to the curling rink.

Southpaw - it's funny because i did indeed smell it, and no it just smells like paper.

Shannon - thanks - my mom alwasy gets irritated when i ask for framed prints for my b-day, because i do so frequently. Alas, i'm pretty much out of wall space. Or am i...?

Roxy - well in my family we love to eat out, so pretty much we'll pounce on any excuse to do so

Natalie - you are indeed so thanks for showing up! The contest post will appear soonish

It was one of my on call days. It just turned out to be a bad day to be on call.

My job. I'm on call every Tuesday and every 5th Sat. and Sun, if there's a problem after hours/weekends that needs immediate attention.

Happy belated birthday! Sounds like you had a fabulous time. :) Those food pictures are making me drool. Drool, I say!

So glad to hear it was a super special day. Here's to many more!

Teebore - that's ridiculous! you need to get paid more, i say

Anissa - thanks! yeah, i wish i was eating there again right now!

Tapas is good! And didn't know you were a twin.

Dominique - Thanks! it took me a long time to decide on what i wanted my elephant to look like - i still sometimes wish i had gotten a colored one.

And I'd given you an award yesterday - might already have it! They seem to be going around at the moment.

Alex - thanks! And i did get it - i've got a post in the works right now

Ooh! I love the carnival glass dishes. so pretty.

Verif Word: Obraingu, what my brain feels like right now.

Achinghope - yeah their really awesome. much much better than money.
and that word verification is fantastic